Driving fast is not a crime…well it could be depending on the speed limit. But, we digress. The point is if you have one of the top rated radar detectors you will at least know when you

are being target by law enforcement.

Today, we want to look at a one of the overall best car radar detectors on the market, the Escort Passport S75g High Performance Radar and Laser Detector.

If you want to see all of our Best Radar Detector Ratings – Click HERE.

The Passport S75g, like the name suggests is a high performance radar detector

It delivers the best protection on all bands including conventional and ‘instant-on’ X-band, K-band, Superwide Ka-band, and ‘POP’ mode. It has Multiple high-performance laser sensors that provide maximum laser warning including off axis protection that you would expect in a top rated radar detector.

response time on all bands.

It also comes preloaded with thousands of Safety Camera locations across the nation. This includes both red-light and fixed position speed cameras. You can even add your own hot spots using the Mark Location feature. Once you mark a location the Passport S75g will warn you so you are not caught off guard.

This top rated radar detector even used artificial intelligence to automatically ‘learn’ each radar signal to determine if it is a real threat.

The result of all of these state of the art features is a radar and laser detector truly deserving of the title the best radar detector on the market. Yes there are similar detectors out there but this one is one of our favorites which is why we wanted to give it a review of its own. 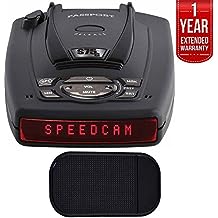 Top radar detectors like the Passport S75g also help you avoid speed radar traps which I personally think are wrong. Probably does not matter what we think because the government sees the speed radar traps as an income producer that even avoids the cost of a police officer used to run it.

Radar detectors are legal in most states which is good news, however radar jammers are not legal. According to most research radar detectors do not as a rule make you drive faster. In fact they have tendency to make you more careful more aware of what is going on around you on the road.

Yes, they can detect in bad weather; although if the weather is too bad the police will probably not be out there anyway.

Police do have a number of tricks in an attempt to defeat even the best rated radar detectors. Most police cars have speed radars in the front and back. If the police car is well hidden it can also make detection more difficult. These tricks along with many others including the ‘pop on’ can get you in trouble even with a radar detector. The worst case is if you are the first car going by after the police get their radar gun set up. This makes it very difficult for any radar detector to give you sufficient warning of a radar gun.

When looking for a radar detector that will actually help you, you will probably find the best prices and options online. Make sure you buy new radar detectors and the current models since they are most likely to have the most up to date features and extras. Technology is constantly changing so you can expect frequent updates and improvements.

Are radar detectors worth it? Well the price of one ticket including court costs will probably make up for the cost of a new radar detector. Once you add in the increase in your insurance there is no doubt that they are worth the money. Insurance is already expensive enough, the last thing any of us need is an accidentally speeding ticket just because we were not paying attention at that particular moment. Protect yourself and your driving record!

We have reviewed the best radar detectors we can find (we update it frequently). So feel free to check out our Best Radar Detector Ratings.